Being In Love With An Alcoholic

I carried my love letter around for weeks before I steeled myself to read it to Matt. We'd fought earlier that day, and on our walk to the train he stopped short in front of an Irish pub.

"We definitely shouldn't go in there,” he said. “Not even one drink to smooth things over."

Matt and I spent a lot of time in bars. We drank Fernet with beer chasers at the dives near our office and stiff martinis at the most elegant restaurants downtown. I liked to see us through the eyes of the other patrons, who knew nothing of his crumbling relationship with his girlfriend in Los Angeles; I imagined them grinning when he fixed my wayward collar or nodding knowingly when I plucked the tomatoes off his half of the salad.

From the beginning, I noticed something unusual about his drinking, not so much the volume he drank but the restless way he fumbled with his glass between sips. We worked at the same startup, and one night a few of us stayed late, listening to music and draining our office's secret whiskey stash. Eventually everyone tapered off and we found ourselves alone in the doorway, close enough for his scruff to tickle my face.

I explained that I had never kissed anyone with a beard before — “I’m from the East Coast!” — and he wrapped his hands around my waist gently, like he knew he needed to be careful with me.Whatever reservations I had were no match for the flicker of possibility, now coursing through my body, that 25 years of being alone had led me to this one person.

We spoke in confessions, like a pair of teenage pen pals reading their letters out loud. He left surprises next to my keyboard — lottery tickets, a handwritten composition asserting the pantsuit's sex appeal, and a page he'd ripped from a magazine profile of the writer Malcolm Lowry. (Matt had underlined the phrase "He never met a woman without sizing her up as a typist and as an editor" and commented: "That's what I did with you.")

From our adjacent desk chairs we scoured Craigslist for apartments around the world, dreaming up bohemian adventures in Joshua Tree and South America. I didn't know how to show him that our real life together could be as magical as any of these fantasies, but I tried. On his birthday, I handed out orange hats and fake mustaches, transforming our whole department into a tribe of mini Matts.

Alcoholics are liars. I don't mean that they're conniving or evil, just that they have a well-developed habit of adjusting facts to conceal their disease. It's barely noticeable at first: a fudged detail here, a different word there. "I wouldn't say that" subs in for "I didn't say that," as if their intentions have more weight than what actually happened. The empty promises begin to mount.

At some point you follow their lead, testing the waters with tiny tweaks of the truth before building up to more elaborate performances. "I totally forgot that gin gives me a headache," I'd say, gesturing to my barely touched drink when my body, unaccustomed to the slow and deliberate poisoning, needed a night off.

Then there was the time I signed for flowers from his girlfriend. As I jogged up the steps to our office building, a deliveryman approached me with a tasteful bunch of calla lilies. Paralyzed, I stood outside with the blooms against my nose, sucking in big mouthfuls of air and breathing them back out until I could force my face into a smile.

"Looks like somebody got a bro-quet," I announced, finally opening the door.

Scarier still is when the lies stop altogether. Matt's legs — long, athletic legs, the only ones I've ever struggled to keep pace with — startled me awake at 8 a.m. one Saturday. The shakiness I'd attributed to his fidgety nature was actually a full-fledged withdrawal symptom.

A few minutes later, he walked in from the kitchen holding a beer and reached across me for the bottle opener on the nightstand. I felt a perverse sense of pride, knowing he must really trust me if he didn't have anything to hide. Mostly, I just wanted his pain to go away. He crawled back under the covers, resting the bottle on his chest, and I pressed my lips to the semicolon tattoo stamped inside his arm.

It was clear that Matt was powerless over his addiction, but I wasn't yet aware of another important truth: that the people who love addicts are powerless too. Being close to someone so fundamentally sad doesn't drain you of hope; on the contrary, it forces you to adopt an exhausting optimism. You have to commit, above all else, to the delusion that your relationship is exceptional. If you try a little harder — if you do just a little bit better — then maybe your love will be enough.

I was sure things would improve after Matt broke up with his girlfriend and I changed jobs. By then, reading, eating, and even laundry had become centrally defined by his presence or absence. As soon as we left each other's company, we'd hop on the phone for six additional hours. The more we talked, the harder it was to hang up. The longer we spent together, the more insufficient that time felt.

Even our shared wanderlust had become a point of contention. "This is why I'm moving to Mexico," Matt would declare in the middle of an argument. The ugliest parts of ourselves — the parts we'd never wanted to show anyone — always seemed to be in collusion, conspiring over some dark plan.

One night, we were having a nice dinner and got into a minor disagreement, about politics of all things. Matt went outside to smoke a cigarette, and I noticed that his wine glass was empty, while mine was still half full.

"The meal doesn't end when you finish your drink," I said to no one in particular.

When he called the next morning to make amends, I could already hear the liquor in his words, so muted and distant. I told him we couldn't see each other anymore and he didn't put up much of a fight. He just repeated, again and again, "I'm so bummed."  After everything we'd been through, the fact that my heartbreak was a mere blip, barely felt or articulated at one table in one restaurant in the northeast corner of San Francisco, struck me as the cruelest part of all.

I've always believed that giving up on people is the province of the weak — that maturity means staying on good terms with all your exes and repairing every damaged friendship. But if Matt's problem is that he can't have just one drink, mine is that I can't have just one drink with him. Even if our separation is for the best, I refuse to mark the time apart by celebratory milestones. How many months since we've spoken, how many weeks since I've cried...

The months do pass, though. Thinking of him now feels like returning to a place where I used to live: part of me never left at all, and the other part is further away than ever. The distance becomes its own sort of adventure, memories overlapping on the present without warning. Whatever it is I've come back to look for disappears behind the horizon, just out of reach.

A sudden sweet taste in my mouth will remind me of Matt buying ice cream for the homeless guy on his corner. ("I want to eat it with my fingers," the man had said when Matt offered him a spoon.) Sometimes I stare at a sentence too closely and it becomes the soft skin of his bicep — as if he invented punctuation when he got that silly, precious tattoo I would have hated on anyone else.

Once I made the mistake of replaying an old message he'd left me. I thought his voice was like a time capsule that I could dig up and revisit whenever I wanted, but the contours were off and the vowels sounded distorted.

And of course, going anywhere near our old bars feels wrong. If I do get close enough to look inside, I can't help scanning the room to identify which two seats we would choose. I'll see a girl picking at a coaster anxiously and think back to the night when I laid the creased pages of that letter on a barstool — full of nerves, because I had so much to lose — and read to Matt about a perfect day.

It was the end of winter break, my final year of college. Right when I was supposed to head back to school, a huge blizzard hit and grounded every flight east of Chicago. My sister and I walked through the deserted streets of downtown Baltimore until we chanced upon the only open establishment.

I told Matt how the owner had led us to a booth in the back corner, where he brought us hot toddies and sandwiches. We'd talked about baseball, books, our family — it didn't really matter, and neither did the snowstorm or my looming graduation and the giant question marks that came after. In that moment, as I felt the warmth returning to my fingers and the tip of my nose, the whole world was contained in my sister's head, resting gently against my shoulder.

Matt's hand started shaking so I reached across the damp wood surface between our coasters to steady it.

"Do you understand what I'm saying?" I whispered. "I could sit next to you forever." 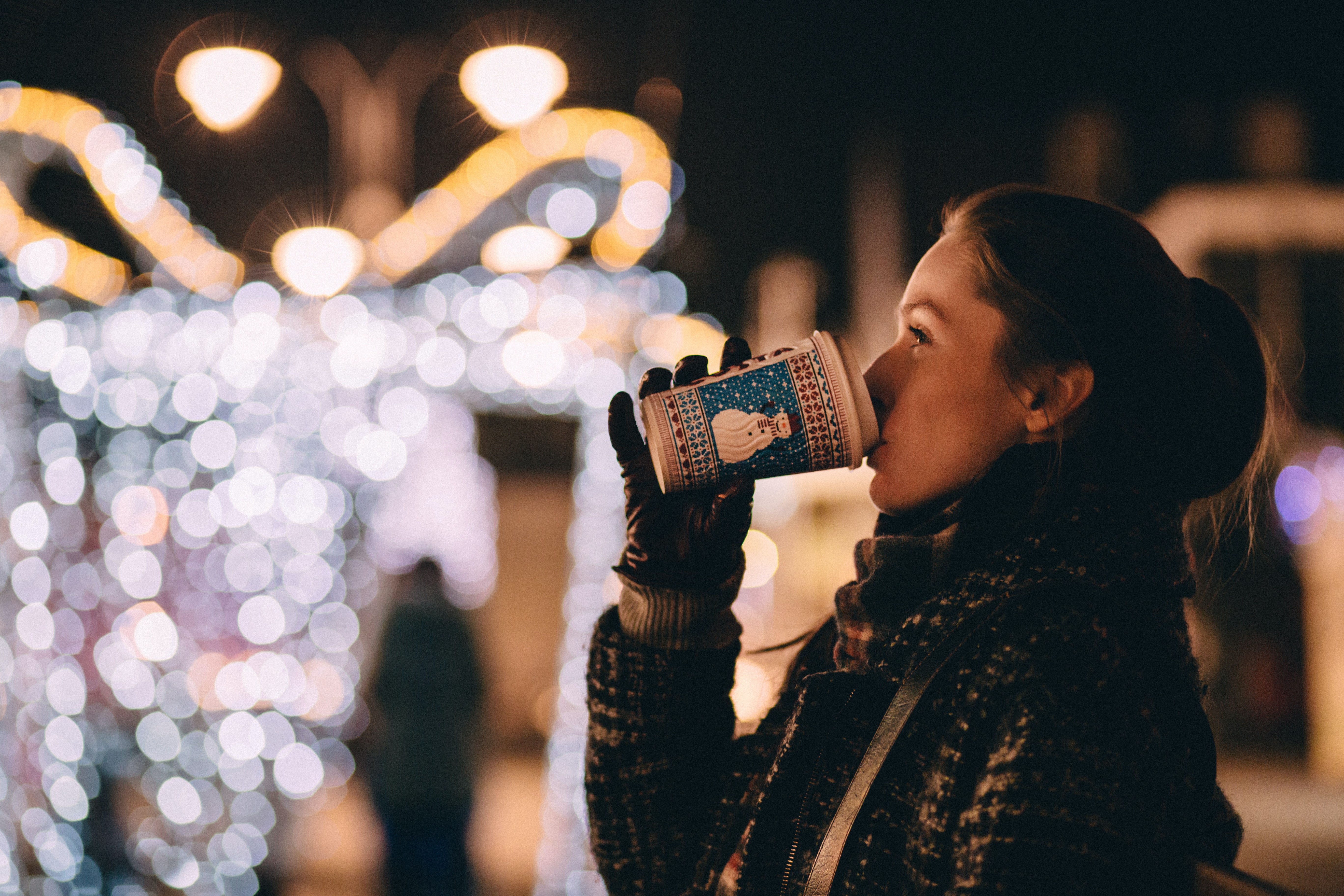 5 Tips For Getting Through The Holidays After A Breakup

I Started To Hate Friday Nights

How To Get Over Your Ex